The $65 million project aims to improve outdated traffic patterns in the Warehouse District, which will bring several failing intersections up to acceptable standards.  The next step is to submit plans to the City of New Orleans for permitting, zoning, land use, and to advertise for bids to construct the project. The improvements proposed will be funded entirely by the Authority with no funds needed from the City.

The Park Construction Project is part of a comprehensive plan, known as The Convention Center District Development Project that will revitalize an important part of the city through new development on a 47 acre tract owned by the Authority, and to make significant visual and functional improvements to the area around Convention Center Boulevard.

Plans for the park and improvements to the streets are is the result of several extensive traffic studies that take into consideration the needs of convention attendees, cruise ship passengers, warehouse district residents and businesses, commuters to the CBD and port freight traffic.

The Convention Center District Development Project represents the largest single private investment in the City of New Orleans since the 1984 World’s Fair.  In addition to the park, key elements include a world class anchor hotel, improved walkability, lighting and streetscaping, new premier retail shopping options, residential living, fine dining and casual restaurants and entertainment, cultural and arts venues.  These plans will be accomplished in the form of a public/private partnership with a Master Developer that is expected invest over $700 million.

“This is a transformative plan to take Convention Center Blvd., from Poydras St. to Henderson St., and transform it into an urban park, a canopy of trees and plantings, and make it an active green space for Downtown New Orleans, both to enhance the experience for our meeting attendees and conventioneers and also the residents. It will provide an important function as the ribbon that ties the core of Downtown to the new development, located upriver from the Convention Center.,” said Bob Johnson, President/General Manager of the New Orleans Ernest N. Morial Convention Center. 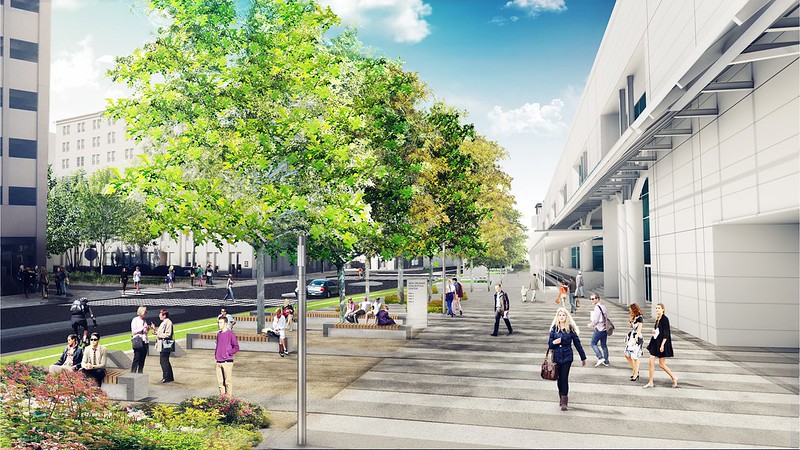